Darren is the founder and owner of Yoga Central, Madhya yoga and Backfree. He discovered yoga in 1996 and has since attained a priceless wealth of knowledge in the art of (Iyengar) yoga.

Darren has spent over a decade integrating all he has learned toward his own personal practice and toward working as a yoga teacher assisting many different people with various professions, injury and athletic backgrounds.

Darren now runs multiple businesses one of which is his yoga school called Yoga Central, established in 2003. Yoga Central is known for its authentic, high-quality yoga classes and Darren’s profound knowledge of the human body that has helped many people to get out of pain.

Based on years of experience and expanding his knowledge Darren discovered a formula of how the body reacts via counterbalance causing referred pain to areas such as the knees, spine, shoulders and hands that in most cases are a result of an uneven foundation of the body. Out of this, Darren’s own unique style of yoga called “Madhya yoga” developed. Through techniques of alignment this approach works on balancing and recalibrating the body and the nervous system to attain optimum health and performance. The focus lies on the purpose and the effects of every asana for mind and body to attain balance and strength within physical movement instead of the aesthetics of a yoga pose.

Darren published a book called “Backfree” on his further insights into the functioning and protective mechanisms of the human body and his discovery of how to release it. He discovered certain trigger points that connect through fascia; further research and practical appliance of his techniques to activating these trigger points, the fascia and the nervous system of the body Darren has had great success in alleviating back pain and sciatic pain. A refined and thoroughly conceived concept, Backfree, was the result. Backfree is a treatment program comprising of specific exercises and actions within each exercise

Darren found that alienation within the yoga industry is a big issue and there is a large amount of people who believe their bodies wouldn’t be suitable for it. The Backfree system however is designed in a highly effective, universal and straight-forward approach. It that has had huge success in assisting a range of people whose everyday lives, professions or hobbies exert repetitive strain on the body with:
–       Back and sciatic pain relief
–       Prevention of unwarranted surgery
–       Enhanced athletic performance
–       Injury prevention and rehabilitation 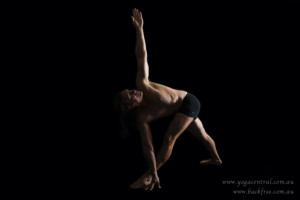 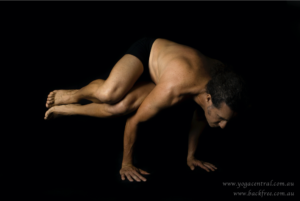 Instructor Training: if you are interested in learning more about Madhya yoga and participate in an ISM Teacher Training Course.
“Yoga classes” if you would like to join a yoga class.

“Backfree” if you would like to find out more about Darren’s treatment program specifically designed to target back pain and more.
© Copyright 2011 Yoga Central. Yoga Madhya ™

Noosa hinterland on the Sunshine Coast